Fourteen years ago, David Cholmondeley made a life changing decision. 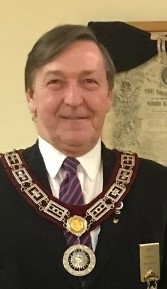 He accepted an invitation to join the IOOF Moore Lodge in Thorburn. He knew little about the non-profit organization because in the past IOOF Lodges kept much of their volunteer work out of the public eye, but he was willing to give it a try.

“It has been a life changing experience for me,” he said.  “Anyone who joins us seems to be in it for life.  That is the type of organization it is and that is why I say it is a life changing thing.”

Today, he said, IOOF and Rebekah Lodges are making more of an effort to let their good work be known to the general public in hopes of attracting new members and new supporters to their fundraising activities.   It is posting regularly on the internet as well as hosting an Atlantic Province conference in Pictou County this summer.

“I was 48 years old when I joined. I couldn’t work anymore and a friend of mine joined and asked me.  I didn’t know anything about it and there were so many myths, but the newer generation is saying we have to get this out.  This kind of caring and giving has been done for years, but now we are putting it out on Facebook.  As a result, our events like takeout supper numbers increased enormously. Most lodges are in small communities and rural areas seem to be thriving the best. “

“This is our 200th year so we would like to have at least 200 members attend,” he said.  The two-day conference will include lodge business, awards and a banquet. In past years, he said such an event would be held at a hotel because it is convenient for older members to be in the one location for the two days, but he felt that it was important for fellow non-profit groups such as Summer Street and CHAD Transit Service to have the conference’s business.

It is just one of the ways that IOOF members support their local communities, he said.   There are five IOOF lodges in Pictou County that include Westville, Thorburn, Springville, Pictou and River John who fundraise on their own for charities of their choice in addition to supporting larger projects at the Aberdeen Hospital as well as the William Eye Institute, which is a branch of John Hopkins University, and focuses on visual eye research.

In addition, lodges offer school bursaries and the IOOF has a student loan program for students related to IOOF members.   It also owns the IOOF Home in Pictou for seniors.

New members are always welcome and information about each lodge and the work they do can be found on Facebook or on the website IOOF.org.   Mr. Cholmondeley said in the past it used to be that only men joined the IOOF Lodges and women were part of the Rebekah lodges, but this has changed so men and women can join either.

Both the IOOF and Rebekah Lodges work together to accomplish their goals of support local communities and the lodges have been focusing on hosting family fun events such as holiday parties for Easter, Halloween and Christmas so families can enjoy time together. He said some volunteering and acts of kindness continue to be done behind the scenes to help people in need and all of the work by IOOF and Rebekah members is done under its motto of benevolenceand charity for all.

“Key words we follow are friendship, love and truth,” he said. “Everything we do is for our communities.”

Anyone interested in learning more about the IOOF or Rebekah lodges can contact Mr. Cholmondeley by email at deak1812@hotmail.com Posted 20 months ago by Sueann Musick